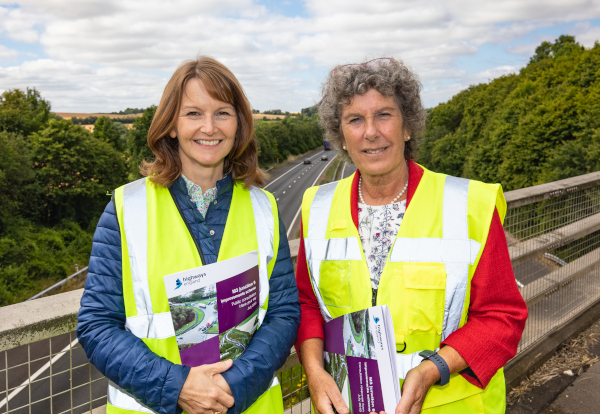 Ahead of the next consultation event on August 3rd, Liberal Democrat spokesperson for Winchester & Chandler’s Ford, Paula Ferguson, has called on Highways England to properly assess the long-term environmental and air quality impact of the proposed M3 Junction 9 improvements.  The proposal to rebuild Junction 9 on the M3 is primarily designed to remove congestion at the junction and while the current MP has welcomed the plans, environmental groups are calling for the project to be scrapped.
Paula believes that the short-term reduction in traffic congestion and improvements for cyclists, must be balanced against the short and long-term environmental impact.

Paula Ferguson comments:
The plans will cut traffic congestion and improve routes for cyclists, but Highways England need to do more to properly assess the short- and long-term environmental impact.  They've assessed it during the construction period, but not long term.

'While in general, infrastructure improvements are to be welcomed, I am concerned, like many other people in Winchester, about the impact the changes will have on air-quality and carbon emissions both during construction and going forward. We need to know more.

Many residents in Kings Worthy are also worried about having to cross 3 lanes of speeding traffic in order to get onto the A33.

When there's so much concern about the environment, Highways England are completely wrong not to model the long-term environmental impact of the junction changes. This is something they simply must do.’

‘The improvements should reduce the amount of traffic that is simply driving through the city, but it's still not enough. Hampshire County Council must move more quickly to provide additional Park & Ride facilities so that fewer cars come into the city as a whole.

Highways England are holding another consultation event on Saturday 3rd August at the Tesco Extra, Winnall and residents are encouraged to go along.