This Saturday, loads of Winchester Liberal Democrat members and supporters are going to London to campaign for a People's Vote and to Stop Brexit.  Are you coming?  Would you like to march with us? Sign up here and we'll keep you up to date with our plans for the day.

Jo, from Winchester has asked us:

"I was one of the public who voted for Brexit. However, it now seems that the advice given by the Brexit group was incorrect. Had I known the full picture about what it would mean I would never have voted for Brexit. My views are shared by many professional people I know.

Please let the public have a vote on the matter before we actually leave the EU. Or please don’t press ahead if it would mean years of economic ruin for the UK."

She is not alone. The Liberal Democrats want to give the people the final say on the Brexit deal. If it’s not the right deal for Britain’s future, then you should be able to reject it and choose to remain in the European Union. 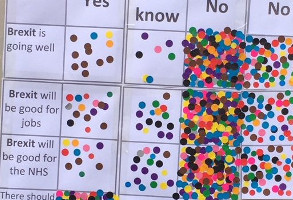 We also want to ensure that the rights and freedoms of EU citizens already living in the UK are protected, including their right to live, work and study here in Hampshire. They should be free from discrimination and abuse. Will you join our campaign to stand with EU citizens, who contribute so much to our economy and society, but are now facing uncertainty?