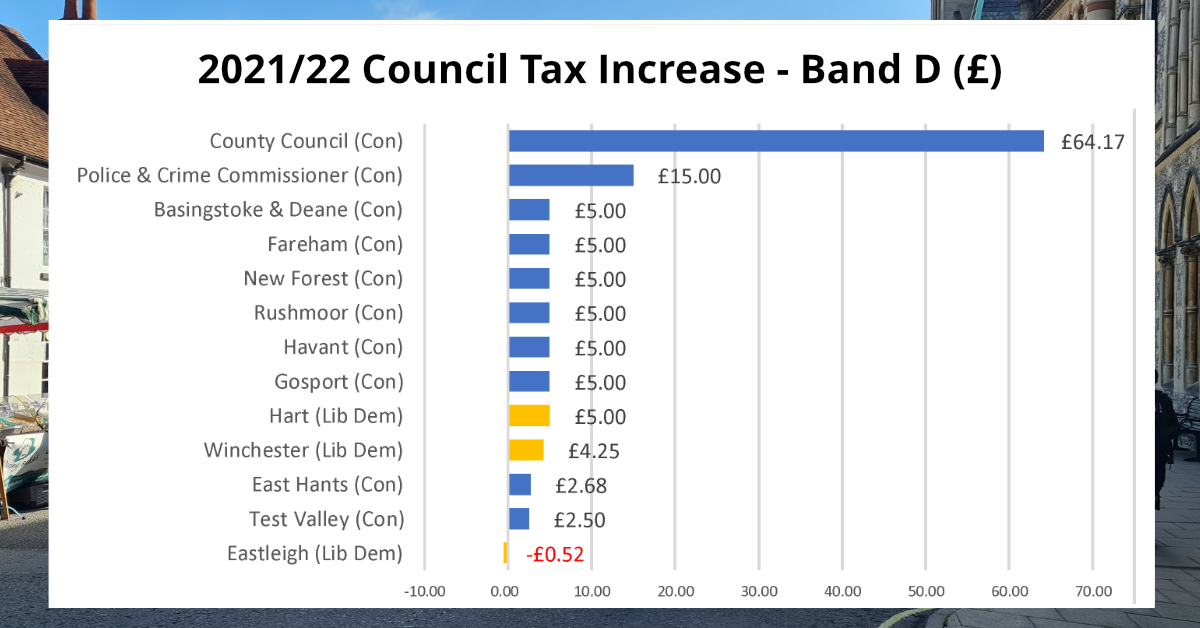 As you may have heard, Winchester City Council is putting up council tax by 3 per cent this year to help fill a hole in its Covid-hit budget. Local Conservatives are crying blue murder, saying the proposed increase is proof of Lib Dem profligacy.

As usual, they’re hoping you won’t look too closely. Winchester’s 3 per cent increase equates to £4.25 a year on the average council tax bill for a family living in a Band D property – that’s 8p a week. For the second year running, the Lib Dems in Winchester are putting up council tax by less than most other councils in the county.

By comparison, Conservative-led Hampshire County Council has increased its share of council tax this year by £64.17, and the Police & Crime Commissioner (elected as a Conservative) by £15.00.

So, when you hear Conservatives complain about Lib Dem tax increases, ask them why the biggest increases in council tax are all in Conservative-run districts and councils.

It gets worse. When they lost control of Winchester City Council in May 2019, the Conservatives left behind a trail of failed and unviable projects, and a projected five-year budget shortfall of £19 million. (They deny it now of course but it’s all set out in budget papers they submitted just months before leaving office).

The current council has spent much of the past two years repairing the damage of Conservative maladministration. Tough choices have had to be made – not just on council tax but on garden waste, car parking and some of the technical services the council provides.

Covid has complicated the task immeasurably. Successive lockdowns have cost the city council millions in lost income and extra expenditure. Unlike many councils, Winchester kept services running in lockdown. The bins were emptied and the phone lines remained open. Rough sleepers were housed, local businesses received help and no child went hungry.

That’s a record to be proud of, but it comes with a price tag. Central government stepped in with extra funding – but not enough to cover the true costs of Covid. Even with the extra funds from London, the shortfall was still more than £3.7 million.

But back to that 3 per cent council tax increase. What would the Conservatives do instead? They’d freeze the salaries of council staff – a slap in the face to the officers who’ve worked hard to keep frontline services running during Covid. And they’d resort to their old trick of running down reserves and building up a brand new hole in the finances - this time it would be £7 million. (And still no serious plan to address it).

Oh, and for good measure they’d jettison much of the council’s ground-breaking work to reduce carbon emissions across the district – which one of their councillors this week called a “vanity project.”

The budget discussions this year were conducted by video, sparing councillors an opportunity to argue with one another in person. But even by video it was a depressing thing to witness.

If this episode has taught us anything it’s this: that the Conservative Party in Winchester still can't produce a budget that adds up. And that if you want a city council committed to sound finances and effective climate action, there’s only one choice: vote Liberal Democrat on Thursday, 6 May.