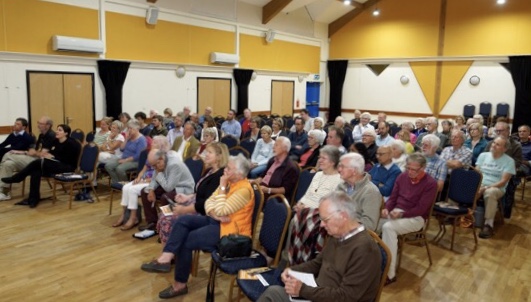 At a busy public meeting at The Hilt Community Centre in Chandler’s Ford, People came from across the community to hear Paula Ferguson’s views on local issues and taking on today’s turbulent politics.

“I’m not a career politician,” explained Paula. “However, I simply couldn’t stand idly by when I see the mess that the country is in. I’ve always believed that if you’re not happy with the way things are, then you have to step up and do something about it."

Paula has lived in the constituency with her family for 20 years and has worked in business, in the voluntary sector and in education. She was motivated to get involved in politics after the EU referendum. Having worked in both a bank and a food bank, Paula’s concerned that many of the politicians gambling with our futures have little or no experience of what it’s like to live in the real world.

During the meeting at Chandler’s Ford, Paula laid out her vision for keeping politics grounded in the reality of local life – even while taking on the biggest issues of the day:

“We have to protect our economy, our communities and our jobs - and that’s why we have to stop Brexit. When real action is urgently needed to fund our public services properly and tackle the climate emergency, we can’t plunge the nation into chaos,” said Paula, “I don’t want people to worry about whether they will be able to see their doctor or about air quality or the deep and prolonged cuts to education funding. I believe, we can live in an open, tolerant and fair society, where everyone has an equal opportunity to succeed.’’

Together with local Liberal Democrat councillors, Alan Broadhurst, James Duguid, Wayne Irish, Janet Evans and Tim Groves, Paula answered a wide range of questions on both national and local issues and highlighted her commitment to being a strong voice for the Constituency. At the end of the meeting, many people waited behind to speak to Paula and one thing was clear: whatever their political persuasion, they all agreed things have to change.