The Liberal Democrats recognise that we couldn't deliver our policy on tuition fees - and Nick Clegg has apologised for this. The truth is that both Labour and the Conservatives supported higher fees, and as we did not win the General Election, we were unable to carry out our promise without backing from either of the two other parties.

Although that's no excuse, we are proud that we made sure the system was as fair as possible. No student pays up front, and they only pay back once they're earning over £21,000. And we're already seeing positive results, with more young people going to university and more of them from disadvantaged backgrounds thanks to the safeguards we put in place.

How much does university cost?
Firstly, nobody pays a penny for university tuition fees until they have graduated and are earning over £21,000. How much you pay depends on how much you earn after.

People who earn more pay more. And all graduates repay less per month than under the old system. If you lose you job or earn less than £21,000, you pay nothing at all. After 30 years, any remaining debt is wiped off. 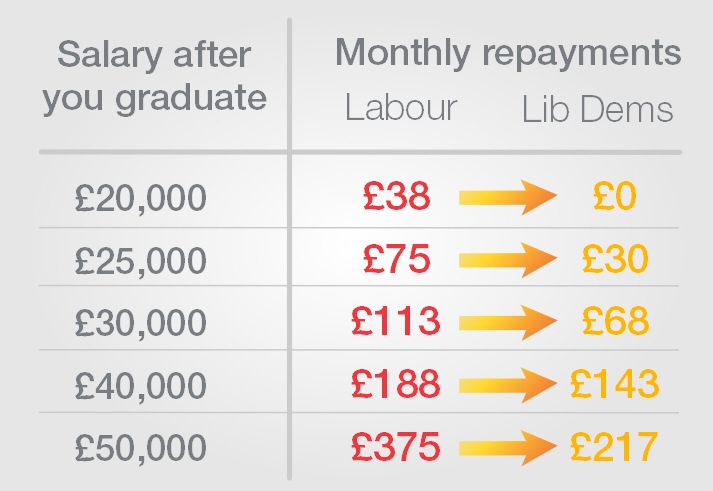 Can poor students still afford university?
Yes, definitely. Nobody has to pay anything before university - you only start paying once you have graduated and are earning over £21,000. And because of the way we have designed the system, the poorest 30% of graduates pay less overall than under the old system.

Liberal Democrats made sure the new system came with fee waivers, bursaries, a £50m National Scholarship programme and higher maintenance grants for people whose parents earn less than about £42,000.

How do students know if they’re getting a good deal?
Universities now have to provide much more information about things like contact time and the jobs that graduates go on to, so students can make an informed choice.

Why did Liberal Democrats allow tuition fees to increase?
Neither the Conservatives nor Labour agreed with our policy to end tuition fees. They both supported the Browne Review, which actually recommended unlimited fees. It was Labour who introduced fees in the first place, despite promising not to. Given the state of the public finances Labour left us with, we therefore had to compromise with the Conservatives.

However Liberal Democrats worked hard to make sure we got the best deal for students, given the circumstances. We made sure that how much you pay for university depends on how much you earn after. Nobody pays a penny until they graduate and are earning over £21,000.

Have you apologised for breaking your pledge?
Yes. Nick Clegg made a public apology in a video. Winchester Liberal Democrats paid for a coach for students who wanted to campaign against the changes.

Did you consider a graduate tax instead?
The new system is effectively a 30-year graduate tax, in that graduates repay 9% of their income over £21,000. If they lose their job or their income falls below £21,000, they will not pay anything. We did look at a full graduate tax, but we discovered foreign students or people who move abroad after university would be able to avoid repaying the cost of their tuition.

See what the independent website Money Saving Expert has to say about fees.