The Liberal Democrats are building a stronger economy in a fairer society, creating opportunity for everyone.

That's why in Government we have created 1 million jobs, helped 1.8 million apprentices, and given 24 million people an £800 tax cut.

We are a liberal voice speaking out for equality, for our environment, and for those unable to speak for themselves.

Our fundamental beliefs are set out in the preamble to our constitution: 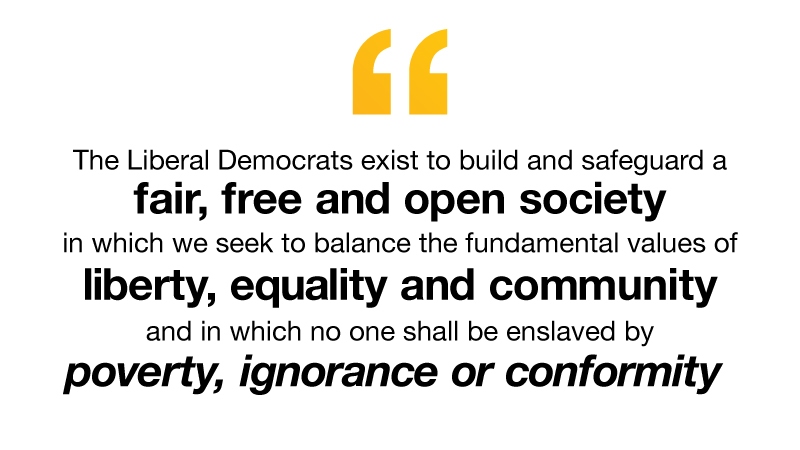 The Liberal Democrats exist to build and safeguard a fair, free and open society, in which we seek to balance the fundamental values of liberty, equality and community, and in which no one shall be enslaved by poverty, ignorance or conformity. We champion the freedom, dignity and well-being of individuals, we acknowledge and respect their right to freedom of conscience and their right to develop their talents to the full. We aim to disperse power, to foster diversity and to nurture creativity. We believe that the role of the state is to enable all citizens to attain these ideals, to contribute fully to their communities and to take part in the decisions which affect their lives.

We look forward to a world in which all people share the same basic rights, in which they live together in peace and in which their different cultures will be able to develop freely. We believe that each generation is responsible for the fate of our planet and, by safeguarding the balance of nature and the environment, for the long term continuity of life in all its forms. Upholding these values of individual and social justice, we reject all prejudice and discrimination based upon race, colour, religion, age, disability, sex or sexual orientation and oppose all forms of entrenched privilege and inequality. Recognising that the quest for freedom and justice can never end, we promote human rights and open government, a sustainable economy which serves genuine need, public services of the highest quality, international action based on a recognition of the interdependence of all the world’s peoples and responsible stewardship of the earth and its resources. We believe that people should be involved in running their communities. We are determined to strengthen the democratic process and ensure that there is a just and representative system of government with effective Parliamentary institutions, freedom of information, decisions taken at the lowest practicable level and a fair voting system for all elections. We will at all times defend the right to speak, write, worship, associate and vote freely, and we will protect the right of citizens to enjoy privacy in their own lives and homes. We believe that sovereignty rests with the people and that authority in a democracy derives from the people. We therefore acknowledge their right to determine the form of government best suited to their needs and commit ourselves to the promotion of a democratic federal framework within which as much power as feasible is exercised by the nations and regions of the United Kingdom. We similarly commit ourselves to the promotion of a flourishing system of democratic local government in which decisions are taken and services delivered at the most local level which is viable.

We will foster a strong and sustainable economy which encourages the necessary wealth creating processes, develops and uses the skills of the people and works to the benefit of all, with a just distribution of the rewards of success. We want to see democracy, participation and the co-operative principle in industry and commerce within a competitive environment in which the state allows the market to operate freely where possible but intervenes where necessary. We will promote scientific research and innovation and will harness technological change to human advantage.

We will work for a sense of partnership and community in all areas of life. We recognise that the independence of individuals is safeguarded by their personal ownership of property, but that the market alone does not distribute wealth or income fairly. We support the widest possible distribution of wealth and promote the rights of all citizens to social provision and cultural activity. We seek to make public services responsive to the people they serve, to encourage variety and innovation within them and to make them available on equal terms to all.

Our responsibility for justice and liberty cannot be confined by national boundaries; we are committed to fight poverty, oppression, hunger, ignorance, disease and aggression wherever they occur and to promote the free movement of ideas, people, goods and services. Setting aside national sovereignty when necessary, we will work with other countries towards an equitable and peaceful international order and a durable system of common security. Within the European Community we affirm the values of federalism and integration and work for unity based on these principles. We will contribute to the process of peace and disarmament, the elimination of world poverty and the collective safeguarding of democracy by playing a full and constructive role in international organisations which share similar aims and objectives. These are the conditions of liberty and social justice which it is the responsibility of each citizen and the duty of the state to protect and enlarge. The Liberal Democrats consist of women and men working together for the achievement of these aims.