Today people are marching to protest against decisions made by a Conservative run council that isn't listening to local people. On issues from Silver Hill to River Park, and Barton Farm to our NHS, local people are fed up of being ignored and of broken Tory promises.

Commenting Prospective Lib Dem MP Jackie Porter said: "It's telling that when we have a Conservative MP and Conservative Council that people are marching in protest. The Tories haven't been listening to local people; that's the cause of this march." 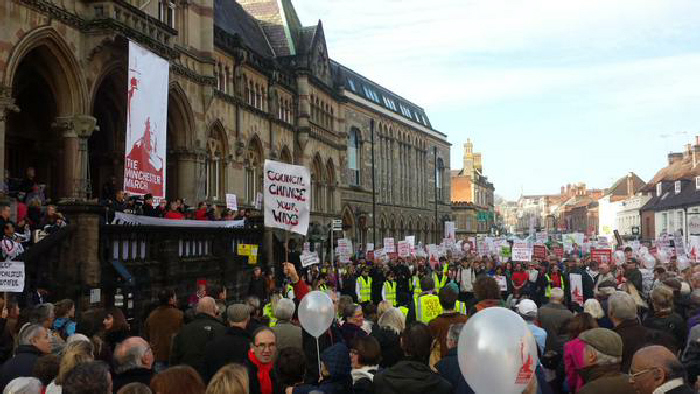 Jackie Porter and the Lib Dems have been clear that allowing the removal of all affordable housing from the Silver Hill scheme is scandalous. This was a decision taken by Conservative Council bosses. The £1 million contribution offered by the developer is nothing more than a token gesture on a £150 million development. We need affordable homes in the city, we should not be pricing out people on low incomes. Council bosses also allowed the removal of the bus station from the scheme. We need to make sure that people do not have to walk long distances to change buses.

Winchester’s Tory MP Steve Brine broke his pledge to give the final say on Barton Farm to local people. He said it would be “quite wrong for a Government Minister to decide this.” But after Lib Dems at the Council turned down the planning application, a Tory minister gave the go ahead.

The Conservative Council tried to push through plans for a new leisure centre without consulting local people. Only concerted pressure from local people and the Liberal Democrats forced the Conservatives back to the table.

Over 1500 people have signed Jackie Porter's petition to save maternity services from being downgraded. Before being elected, Tory MP Steve Brine said that consultant-led maternity services would be his ‘red line’ on our local NHS and that ‘without them you don’t have a District General Hospital worthy of the name.’ Now he is welcoming changes that will mean there is no hospital with these services in Winchester  - exactly what he said he would campaign against.